This page discusses the losses in a typical boost converter which can be used to calculate the efficiency of the Boost regulator working in Continuous conduction mode.

Efficiency ($η$) in general is defined as:
$$η=\text"Output Power"/\text"Input Power"$$

So we just need to calculate all the power losses in the circuit and we can then calculate the efficiency of the circuit.

The Boost circuit can be drawn as: 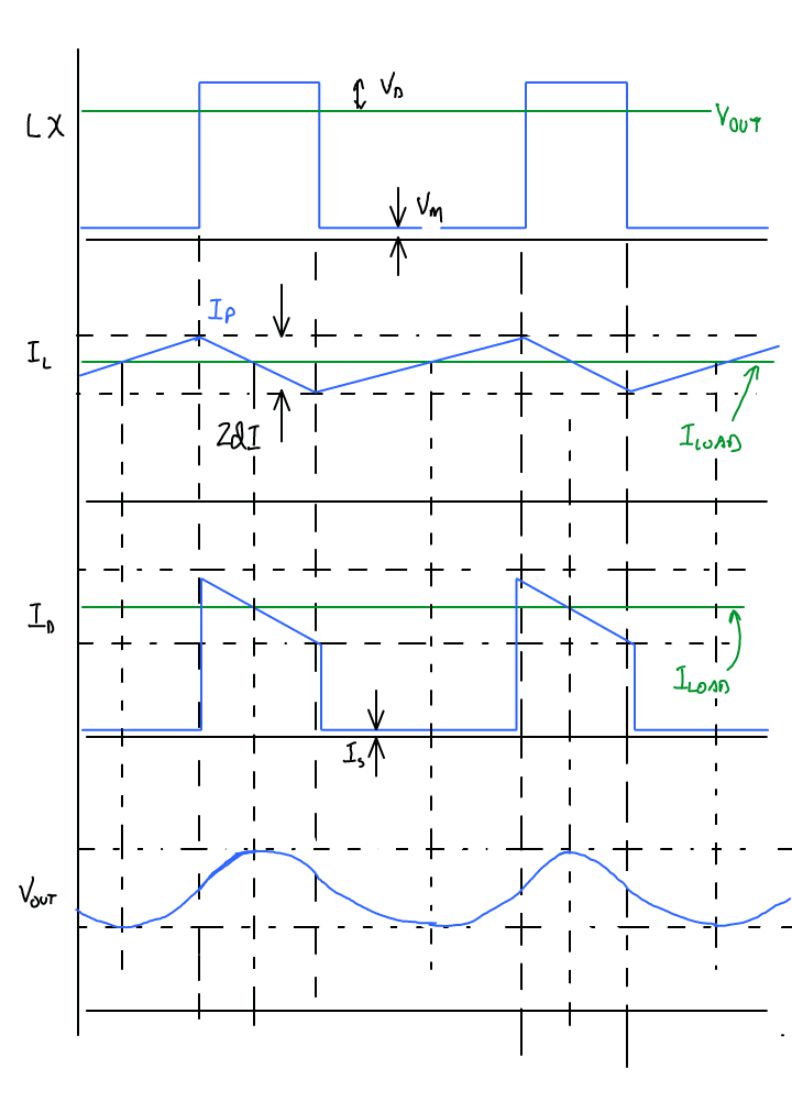 The circuit working is well known and is explained as follows. When MOS power switch turns ON then the inductor sees a nearly constant DC voltage ($V_{in+$) across it and so the current in the inductor ramps up linearly. When the MOS power switch turns OFF then since the current in the inductor cannot go to 0 instantaneously, it charges up the drain node of the Power FET (the parasitic cap) and keeps charging it until it cap voltage reaches a diode voltage higher than whatever output voltage on $V_{out}$ exists. At this time the diode turns ON and the inductor current starts charging the output capacitor. For the inductor current to actually decrease the $V_{out}$ plus a diode voltage should be more than $V_{in}$ so that the inductor sees a DC voltage of $V_{out}+V_d-V_{in}$ across it with the drain of the power FET being positive. This causes the inductor current to ramp down linearly.
Now by controlling the ON time and OFF time of the power switch we can control the average current in the inductor and hence create a boost converter which may regulate the average input current, or the output voltage. For calculating efficiency it does not matter what is being regulated all that we need to know is the $T_{on}$ and $T_{off}$ of the power switch. So now lets start calculating the losses in this circuit.
NOTE: The circuit shows a diode, but there may as well be a shottky or a synchronous FET device to transfer the inductor energy to the output capacitor.

The losses can be divided into 2 types for the circuit

The combined loss of MOS ON resistance and a current sense resistor if present in series with the MOS device can be calculated by taking the combined resistance of the MOS and the resistor as $R_{SW}$. The power dissipated in this resistor during the MOS ON time is given as:
$$P_M={∫_0^{T_{on} }R_{SW}I_{M}^2dt}/T$$
where $I_M=I_P-2dI+2dIt/T_{on}$ which is the equation to calculate the instantaneous current through the MOS device in the ON cycle
This can be substituted in the integral and solved to give:
$$P_M=D R_{SW}[(I_P-dI)^2+{dI}^2/3]$$

These losses happen as a result of the dissipation in the MOS device when it is not completely OFF and the drain voltage is significant. At this time the MOS device may have lot of current flowing through it with a drain voltage on it thus dissipating a lot of energy. This loss is significant and most of the time cannot be ignored. Let us consider the worst case drain current and voltage of the MOS as shown below:

Let us calculate the losses in the OFF and ON transitions separately: