Here is a list and analysis of compensation techniques, that I have come across/used in my circuit design experience. Compensation can be used to:

One thing to always keep in mind when doing compensation circuits is to not get carried away by just poles and zeros. Even if you get all the poles and zeros right and the amplifier bode plot looks very good the circuitry you may have added in the process may not be practical from a transient stand point. For example if you added a cap at a very high impedance point to make a dominant pole and the cap value you placed is so large that when that node needs to respond to a step it is very slow, then that solution may not be usable for compensating that design. Always check transient responses of compensated amplifiers and make sure they are stable and within specifications

This technique involves compensating by locating the dominant pole node and making it more dominant by loading it with more capacitance.

The gain of the amplifier is reduced so that loop gain bode plot moves down and gets stabilized. For an opamp circuit this can be done by decreasing the gm of the input differential pair. Or the Rout of the amplifier can be reduced, this will push the output pole also further which will be good if it is not the dominant pole.

A lead network to do this is shown below:

The technique can be best understood by considering the lead network circuit in a feedback system.

The loop gain equation is given as:

A Lag compensation network is shown below:

To understand the technique look at the circuit: 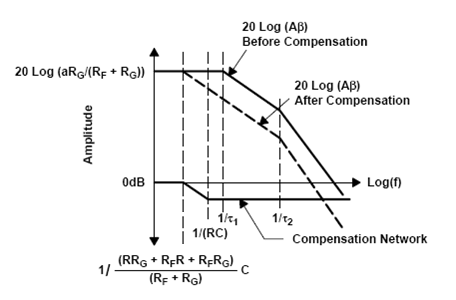 Another way to do this is by the following schematic: 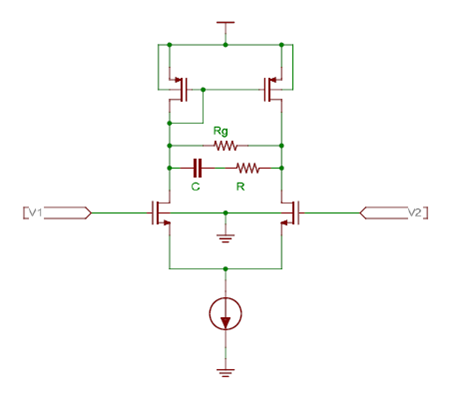 The transfer function of the above circuit is:

A typical Lag Lead compensation frequency plot is shown below: 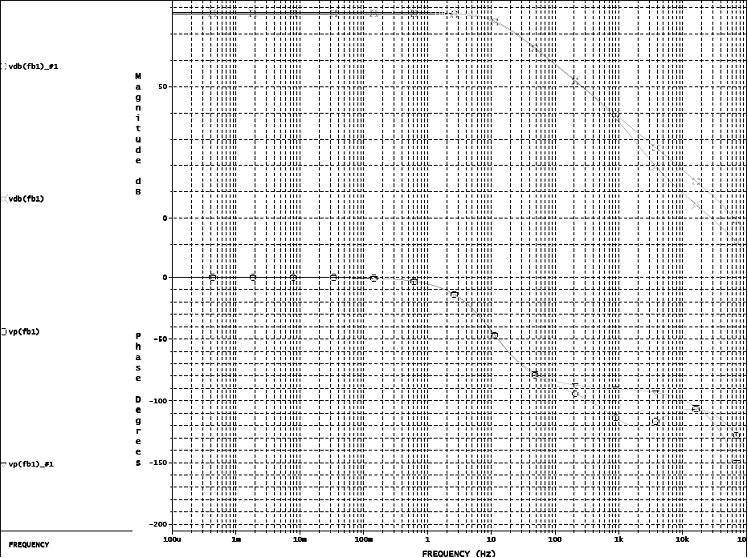 This plot has the pole at the 1KHz and the zero at 3KHz. The gain falls faster than before at 1KHz and the becomes parallel to the original at 3KHz at a lower level. While the phase response recovers fully as if the pole zero pair had not occurred.

As can be seen from the concept that the pole of the lag lead network should be placed much before the GBW of the loop gain before the addition of the network to be effective in increasing the phase margin.

Example of such a circuit is: 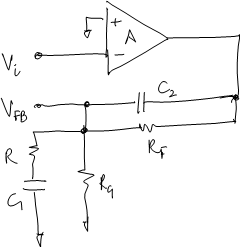 The poles and zeroes for this network are given as:

where K is given as:

If we take some reasonable approximations as discussed in this article we can approximate the poles and zeros to:

Another form that is called the Lag Lead network is:

Example circuit of this is (the same that we discussed for the Lead Network circuit 2):

The poles and zero of this network are given as:

In this method a capacitor is connected across a amplifying stage to remove the stage at high frequencies to eliminate the pole created by that stage and reducing the gain.

In this type of compensation 2 consecutive poles are introduced in the system at a very very low frequency i.e. . This then causes the gain to drop by 40dB per decade and it drops to 1 very soon without reaching to any significant frequency. The phase however is not 180 deg since that much phase shift due to 2 poles happens only at infinite frequency. So although the phase margin is very small maybe just a few degrees the system can never be unstable since it is free from any parasitic poles. One question can be what about ringing response. Since the Bandwidth and GBW of the system is so low, no visible frequency can pass through it so no ringing will be observed.

In this type of compensation a capacitor is placed across a negative gain stage causing the miller multiplication of the capacitance on the input side making that the dominant pole. 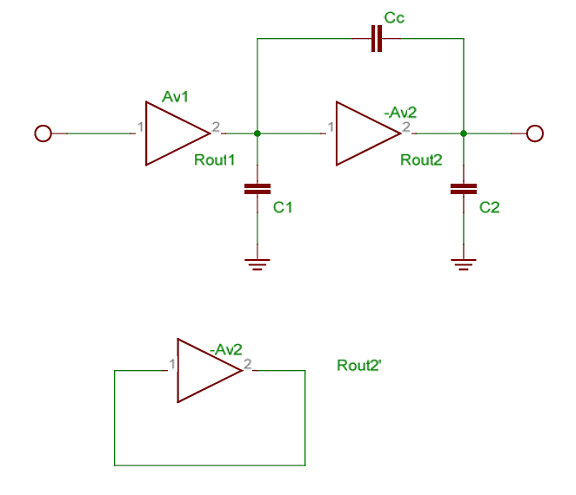 Here if Rout2’ < Rout2 then the output pole is pushed further away. The miller cap acts as a short at high frequency thereby pushing out the pole. After compensation the equivalent circuit looks like:

where $R_{out2}'$ is the output impedance of the second stage when the output is shorted to its input. To see a detailed derivation of the above see here