Generally an opamp by itself is tested in the open loop for the Gain and Phase plots using the test setup shown in the figure: 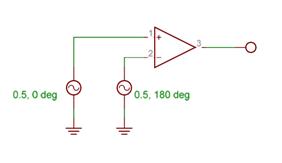 In the above case are giving a input differential voltage of 1 and a common mode of 0. So at the output we look at the Gain and Phase plots and since we assume that the worst case feedback configuration that it will be used in will be with β=1. So we aim to make the open loop gain and phase plots to have sufficient Phase Margin to be stable. 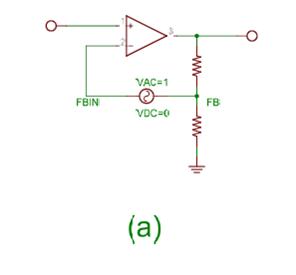 Another case is like we design an opamp to be used inside an integrated Circuit as a sub block, in that case we already know what is going to be the feedback configuration of the opamp so in this case we must include the feedback configuration and then find the gain and phase plots of the loop as a whole. So what should be ideally done is to run a transient simulation and store the node voltages in a file. Now break the feedback loop and place AC source at the end of the loop which goes into the opamp, and then plot the gain and phase plots at the other end of the loop. This can be done using the following circuit configurations (Each takes the example of a simple resistive feedback): 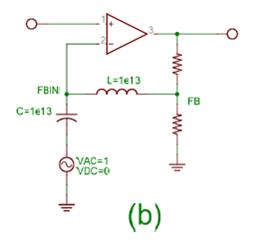 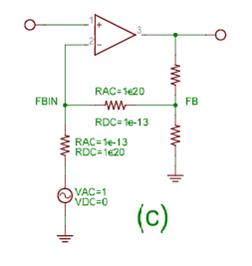 Circuit (a) can be used also to do the transient simulation since the AC voltage source won’t affect it. But when the AC simulation is done then the Magnitude plot should be plotted for Vdb(FB) – Vdb(FBIN) and the phase plots should also be plotted for FB-FBIN, so it is sort of inconvenient. Also see the Feedback Loop gain calculation analysis, this will not give the total result if the input impedance is not infinite, we need to calculate it using a test current source also and then calculate the actual loop gain from the combination of the results. So the point to break the loop is important if accurate results are needed by just 1 analysis.

Circuit (c) shows a way to do this and this circuit can be easily used in the transient and AC Simulations both. The drawback here is that it isolates node FB by the loading of node FBIN during the AC analysis so if FBIN has some loading (like finite input impedance of the amplifier) it will not come in the analysis and give an inaccurate loop gain, so the point to break the loop is important.
NOTE: One thing that I found out painfully is that APS messes up this simulation. If you put resistor values different for AC and DC simulations in the resistor be sure to run the simulation using Spectre and not APS if using Cadence.

To get the Gm vs input common mode voltage plot:

To get the Gm vs input voltage do the following:

To get the Output Dynamic Range do the following: